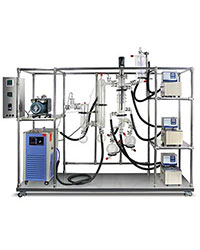 Molecular distillation is a distillation method operated under high vacuum. At this time, the average free path of the vapor molecules is greater than the distance between the evaporation surface and the condensation surface, so that the difference in the evaporation rate of each component in the liquid can be used for liquid mixtures. Perform separation.
The molecular distillation system is a special liquid-liquid separation technology, which is different from the principle of traditional distillation relying on boiling point difference separation. This is a process of distilling and purifying heat-sensitive substances or high-boiling-point substances by using the differences in the free paths of the molecules of different substances under high vacuum. Mainly used in chemical, pharmaceutical, petrochemical, perfume, plastic and oil industries.
A complete set of molecular distillation equipment mainly includes: molecular evaporator, degassing system, feeding system, heating system, cooling vacuum system, and control system. The core part of the molecular distillation device is the molecular evaporator, which mainly has three types:
(1) Falling film type: It is an early form with a simple structure, but due to the thickness of the liquid film and poor efficiency, it is rarely used in countries around the world today;
(2) Scraping film type: the formed liquid film is thin and the separation efficiency is high, but the structure is more complicated than the falling film type;
(3) Centrifugal type: the film is formed by centrifugal force, the film is thin, and the evaporation efficiency is high, but the structure is complicated, the vacuum sealing is difficult, and the equipment manufacturing cost is high. In order to improve the separation efficiency, it is often necessary to use multiple stages in series to achieve the multi-stage separation of different substances.