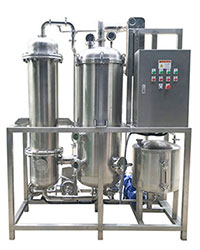 
What is a falling film evaporator?

Falling film evaporation is to add the material liquid from the upper box of the heating chamber of the falling film evaporator, and evenly distribute it into each heat exchange tube through the liquid distribution and film forming device. Under the action of gravity and vacuum induction and airflow, it becomes a uniform film. Flow from top to bottom. During the flow, it is heated and vaporized by the shell-side heating medium, and the generated steam and liquid phase enter the separation chamber of the evaporator. After the vapor and liquid are fully separated, the steam enters the condenser to condense (single effect operation) or enters the next effect evaporator as The medium is heated for multi-effect operation, and the liquid phase is discharged from the separation chamber.
Falling film evaporation is a unit operation for concentrating a solution. Generally, the solvent is volatile, and the vapor pressure of most solutes approaches zero and cannot be volatile. Under boiling conditions, the solution is vaporized to remove part of the solvent and concentrate it, which is called evaporation. In most cases, the evaporator uses water vapor as a heating medium (commonly referred to as heating steam, primary steam or fresh steam), and indirectly transmits heat to the solution through the metal wall. After the solution is heated, the solvent boils and vaporizes, and the generated steam (mostly (In this case also water vapor) is called secondary steam.
The material-liquid distributor evenly distributes the material liquid into each heating tube and causes it to flow downward along the inner wall of the tube in a film shape. The liquid film is evaporated and vaporized by the heat transmitted from the tube wall. When the heat transfer temperature difference is not large, vaporization occurs on the inner surface of the membrane that is strongly disturbed, rather than at the interface between the heating tube and the liquid film (that is, the inner surface of the heating tube), so it is not easy to scale. The vapor produced is usually flowing down the film. Because the vaporization surface is large, the amount of liquid foam entrainment in the steam is small, and the material liquid flows in a film shape on the inner wall of the tube, which does not fill the entire cross-section of the tube, so the amount of material liquid passing through can be small.
The material-liquid distributor is a key component of the falling film evaporator. The heat-exchange intensity and production capacity of the falling-film evaporator essentially depend on the uniformity of the material-liquid distribution along the heat exchange tubes. The so-called uniform distribution not only means that the liquid is evenly distributed into each tube, but also uniformly distributed along the entire periphery of each tube, and maintains its uniformity throughout the length of the tube. When the material liquid cannot evenly wet the inner surface of all the heating tubes, the lack of liquid or less liquid surface may be fouled by evaporation, and the fouled surface, in turn, blocks the flow of the liquid film and causes heat transfer in the adjacent area. Conditions have further deteriorated.

Falling film evaporators are widely used in the evaporation and concentration of water or organic solvent solutions in the pharmaceutical, food, chemical, and light industry industries, and can be widely used in the waste liquid treatment of the above industries. It is especially suitable for heat-sensitive materials. The equipment operates continuously under vacuum and low-temperature conditions. It has high evaporation capacity, energy-saving, and consumption reduction, low operating costs, and can guarantee the invariance of materials during evaporation.

The solution and steam flow in the same direction and they flow from one effect to the last effect. The raw material liquid is pumped into one effect, and it automatically flows into the next effect depending on the pressure difference between the effects, and the liquid is pumped out from the last effect (usually operated under negative pressure). Because the pressure of the latter effect is low, the boiling point of the solution is also low. When the solution enters the first effect, the solution will flash part of the water and generate more secondary steam. Since the concentration of the aftereffect is higher than the previous effect, the operating temperature is lower. The heat transfer coefficient of the first effect is often much higher than the last effect. Downstream processes are generally suitable for processing heat-sensitive materials at high concentrations.

The raw materials are sent from the final effect to the pre-effect in turn by the pump, the finished liquid is discharged from the first effect, and the material liquid and steam flow in reverse. It is generally suitable to handle solutions whose viscosity changes greatly with temperature and concentration, and it is not easy to handle heat-sensitive materials.

Each effect is fed with a complete solution, and each effect has crystals that can be separated in time. It is generally used for the evaporation of saturated solutions.